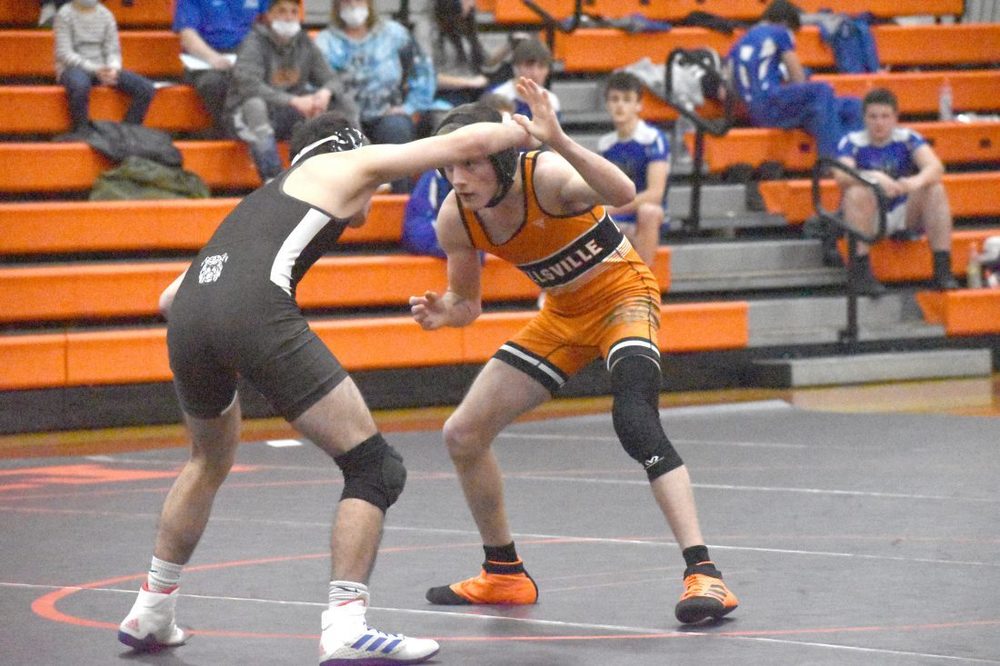 WELLSVILLE — It has been a strange and unique winter sports season, but not many teams have handled it as well as the Wellsville Tigers wrestling team.

“This has been a long road,” Wellsville coach Gary Althiser said. “This is my sixth season and when I started I had all first year kids but one. So now, the works paid off and these guys have all been wrestling for a long time. I just see a veteran team that is gelling at the right time.

“The kids have adjusted well,” Althiser said. “I am really proud of the way they have handled things. We follow the rules to a T and we have kept away from shaking hands with other teams. They have taken this as serious as they should because they want to wrestle and participate.

“I give my kids credit for putting safety first.”

Wellsville has a quick turnaround, as they are back on the mat today and will host Bridgeport and Waterloo.

“There were so many teams that weren’t allowed to wrestle until after the holiday break,” Althiser said. “We are just trying to get our matches in and we have league commitments that we have to meet so that is what we are trying to do. If it has to be back to back, then my kids will suck it up.”

For East Palestine and Lisbon, they are just trying to get on the mat and grow their respective programs. This was the Bulldogs second match and Lisbon’s first of the season. East Palestine is now 2-2.

“I feel it works out really good,” East Palestine coach Rick Hostetter said. “It’s good for our team members and the biggest thing is just getting mat time. Getting them on the mat and good to go.

“My expectation for us is to grow and get better. It takes a longtime to build a program and hopefully in the next 3-4 years we can be at the level of Wellsville and Toronto.”

For Lisbon, head coach Darrell Lawson has only been in the head seat for two and a half weeks. Lawson replaced Adam Newbold after he resigned.

“I was an assistant last year with the high school in the background and in the room actually training them and was at a few of the matches,” Lawson said.

“I didn’t want to leave the program. I have been doing this since the late ’90s and involved in wrestling. I love to do it and I love to watch the kids shine and show what they can do.”

“I give East Palestine and Lisbon credit,” Althiser said. “They are both new programs and they came in and fought hard.”

“Our team is motivated off of everyone’s success,” Wellsville’s Caden Weekley said. “Everyone has been going 10 times better than they ever have and everyone has been successful in their own way.

“Individually, I expect us to all do pretty good. As a team, if we don’t take first in our class, It’ll be a shock.”

“Our team goals are to break the school record for wins,” Althiser said. “The record is 15 and we are at 13 so we would like to break that, win the EOAC and we want to get a couple kids to the state tournament in Columbus.”

Unfortunately, the annual Buck Bailey tournament hosted by Wellsville is canceled this year due to safety precautions,

“It really was,” Althiser said about the difficult decision to cancel. “That tournament is in memory of Buck Bailey. He was the most passionate Wellsville wrestling supporter that we ever had and he passed away and we did that in memory of him and his family because they have been such great Wellsville supporters, especially the wrestling team.”

Lisbon and East Palestine will focus on individual goals due to lower numbers.

“We are looking at trying to get winning records,” Lawson said. “They all had .500 or less records last year so I set it up to not focus on winning the duals but we want to wrestle individually the best we can do. We can’t control what the other opponent does, we can control what we do.

“That’s the great thing about this sport. You have to wrestle (for) today.”