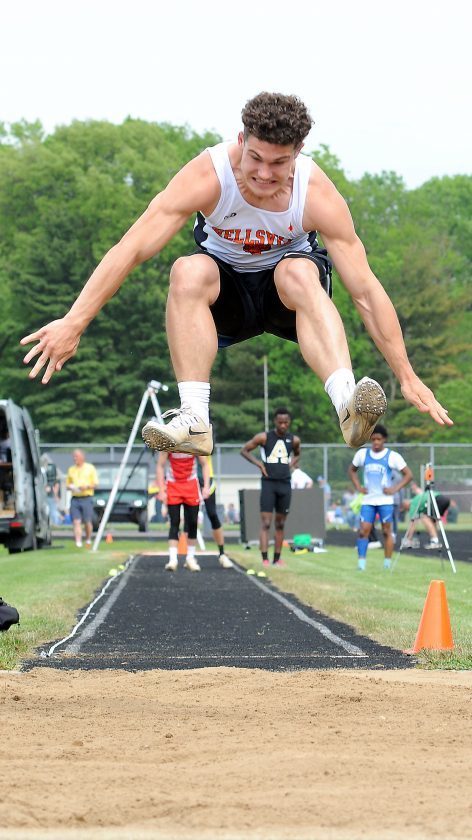 Six jumpers from the regional earned state berths — including both at-large ones.

“This was one of the best regionals for the long jump,” Wellsville junior Justin Wright said. “Our long jump is stacked.”

Wright was third (21-11 1/2) and Crestview senior Dylan Huff was fourth (21-11). The strong field made jumpers nervous at the start of Wednesday’s competition at Massillon Perry High School.

“Definitely when I came out for the first flight,” Huff said. “Then I got on the board and felt relaxed.”

The top five from the Massillon regional are among the top six entering the state meet. The state finals will held at 4 p.m. next Friday at Jesse Owens Memorial Stadium on the campus of Ohio State University.

“A lot of good guys are not getting through here,” Wright said.

Charleston, who ran for 294 yards and five touchdowns in a 43-21 football playoff win over Crestview last fall, is the one everyone was going after.

“Definitely I was going for him,” Huff said. “Then Miller had a big first jump in the second flight and I said there is someone else I can go after.”

“I did not expect to jump that far,” Miller said. “I’ve been kind of in a hole since midway through the season.”

Miller was in first place until Charleston pulled off a 22-2 on his final attempt.

“I figured he was going to pull something out,” Huff said.

Miller had one last chance to regain first, but his final jump was halted for the national anthem.

“He passed me on the last jump, so that was kind of tough,” Miller said. “Just as long as we’re in top four and make it to Columbus.”

The jumpers will see each other again at the state meet.

“These guys push me to do my best every day and every jump,” Wright said.

“I look forward to seeing all of the jumpers from our district,” Miller said. “I want to make the podium and get my best jump.”

Most of the long jumpers do not concentrate just that event.

Wright, Huff and Bable also advanced to Friday’s running finals in their specialties.

“I want to do well in all of them, but I concentrate on the sprints,” Wright said.

“I try to focus on everything I do,” Huff said. “I want to make it in state in all four.”

The top two in each heat plus the next four fastest times advance to Friday’s finals.

¯ East Palestine junior Jaliyah Mixon was fifth in the girls shot put with a toss of 36-2 1/4 on her last attempt. Liberty junior Alyssa Wilson gained the fourth and final state berth (36-3).

¯ The regional meet concludes Friday with the remaining field events at 4:30 p.m. and the running finals at 6 p.m.boys 100 dash, Justin Wright, first in 10.57 (meet and stadium record).