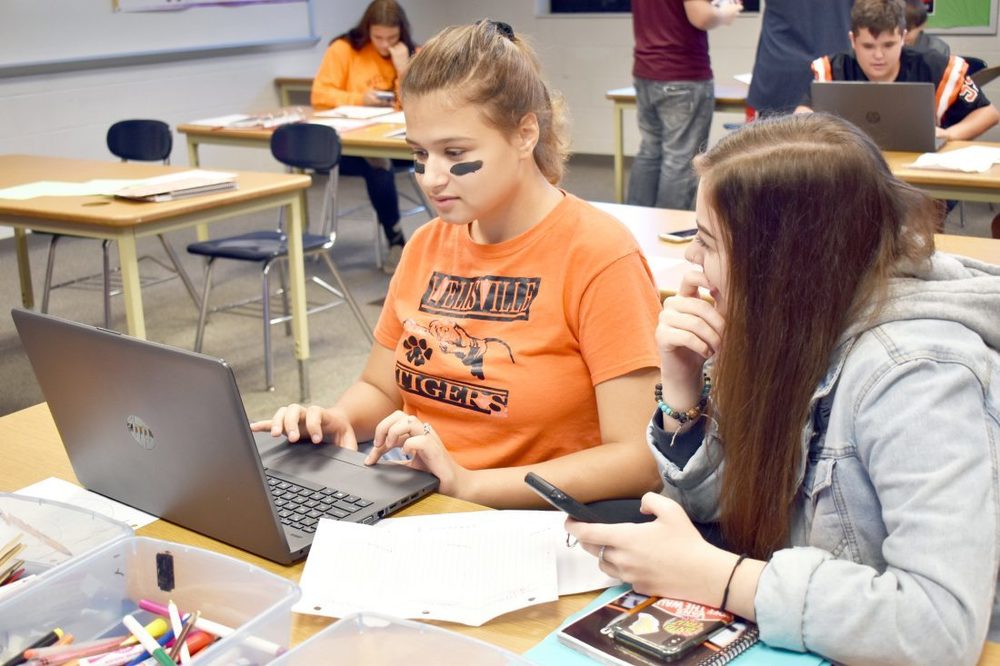 WELLSVILLE — Smoking in the boy’s room is still an issue among high school students. In a study conducted by Wellsville High School teacher Maria McNicol, it was discovered about 62 percent of participants have witnessed vaping in school restrooms.

“We had fun. We monitored the survey everyday on my smart board to see how many people were responding. And what kinds of answers we were getting. So it was fun and interesting to look at that daily and see it as it came to a close,” said McNicol.

McNicol teaches health and physical education classes to grades 8-12. She also teaches life fitness classes and is the head softball coach. McNicol started researching vaping so she could add it to her tobacco and drug unit, because of the nicotine found in e-cigarettes.

The survey opened while McNicol was teaching her drug and tobacco unit. It closed on Oct. 14 after being open for two weeks. This year she taught the unit to 40 students and she asked them to create informational flyers, signs or handouts to inform other students about the dangers of vaping. The projects were hung in the hallways and handed out during study halls.

“I thought it was interesting to see all the statistics that really came from the schools,” said Timothy Newlen, a 15-year-old freshman who took McNicol’s class.

About 400 students from Wellsville, East Liverpool and Beaver Local participated in the anonymous survey. It asked students if they had tried vaping, what kinds of vapes they use, if students have seen vaping in the restrooms and classrooms and how often students see others vaping while in school.

McNicol noted the handouts have spurred classroom discussions on vaping and have informed students about the hazards of using e-cigarettes. She believes the handouts have made a difference. She also hopes the handouts help to inform the faculty and staff at Wellsville because they need to know what to look for and how to educate students on the topic.

“A lot of people didn’t want to take it, because obviously it’s something that you’re not really supposed to do. So people were apprehensive to take it, but I think that some people were just okay with taking it cause it was anonymous,” said Hally Fitch, a 14-year-old in McNicol’s class.

E-cigarettes entered the U.S. market in 2007, and since 2014 they have become the most commonly used tobacco product among teenagers, according to the Surgeon General’s Advisory Board. The Center for Disease Control and Prevention (CDC) reports teens may turn to tobacco products because of peer pressure, low self-esteem, and the way tobacco products are advertised in stores, online, in movies and other forms of media, among other factors.

“We learned about vaping and how it’s harmful to you and how it’s addictive and why we need to tell people about it. So maybe, hopefully the numbers will decrease,” said Braylyn Vance, another of McNicol’s ninth graders.

“I think it’s interesting too, some of my students would say, how about if you just vape water? No water, we learned that it’s still fluid, and it still causes that inflammatory response and leads to these mysterious lung diseases that are popping up, even water. So I think that surprised some kids,” said McNicol.

Vaping can cause dry mouth, eyes, and skin as well as a cough, insomnia, shortness of breath, fatigue, nausea and chest pain. It can also cause heart attacks, respiratory problems, and high blood pressure. There have also been 26 confirmed deaths in 21 states, according to the CDC.

“I think it was a good experience and yes, I mean we realize like I’ve told the kids, I can teach them good behaviors and teach them things to do for their body for the future, but ultimately it’s their decision as to what they do,” said McNicol. “And that’s the case for their peers here that we’ve shared this information, passed on the literature in study halls. It’s ultimately on them to make good decisions. If they don’t, they can’t say that someone didn’t try to help them. I always talk about being a health advocate. I mean it’s huge. We need to share information with others and hopefully help them make healthy decisions.”

Wellsville Superintendent Richard Bereschik said the student handbook does have a section dedicated to tobacco usage and in that section it outlines the disciplinary actions for students caught vaping or using another tobacco product. He said it does seem like students are using tobacco products less, but he knows it still happens. Bereschik added that about 15 years ago the most popular tobacco product among Wellsville students was chewing tobacco.

“Vaping brings a whole new set of issues and it seems vaping causes immediate problems because it’s not regulated,” said Bereschik. “I’m glad we’re researching this, and we’ll do everything within our power to stop this.”