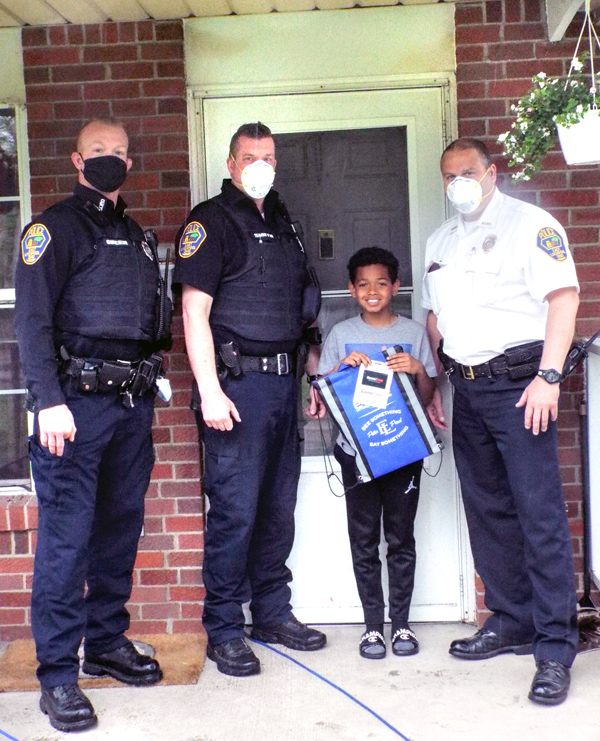 EAST LIVERPOOL — It would have been easy for an East End boy to dismiss a suicidal juvenile’s threat as just talk, but there was something very different this time.

That Friday started out as an ordinary day of sorts for the 11-year-old boy, riding bicycles and hanging out with friends. He observed the teenage neighbor girl with a history of running away, once again sitting all alone.

That wasn’t all that unusual, Roe’s mother, Trisha Osborn, said.

Darnell approached her and tried to calm her down, after hearing the distraught girl threaten to jump off a bridge. When she told him to leave her alone, Roe didn’t listen.

Roe contacted the girl’s mother, who told him to call police.

Victoria Cornell, a dispatcher with East Liverpool, picks up the story here.

After dispatching for nearly a dozen years, she couldn’t have been more impressed with Roe’s calm and precise demeanor as he answered her textbook questions clearly.

“In addition to calling out the address, he also called out cross streets,” which allowed for the backup cruiser from Liverpool Township to quickly find the suicidal teen quickly, after the responding cruiser had been struck by another vehicle when responding.

“Eighty-five percent of the calls that we get we don’t get (a location) right away,” Cornell said, adding he was a big part of what saved this girl.

Roe himself was raising the girl’s ire by following her, pleading with her and trying to intervene when she did actions, such as try to jump into a fire, Cornell said.

At one point, the dispatcher had to tell him to back off because the girl was escalating due to his persistent attempts to intervene. “He was just relentless, and I was concerned about his welfare,” Cornell added. “(Darnell) is truly exceptional.”

Roe even corrected the dispatcher’s misstep when Cornell misidentified the type of shirt he had provided in the girl’s clothing description to assure responders had the accurate information.

Administrators at the Wellsville school district, where he will enter seventh grade, indeed know how amazing Roe is.

His principal at Daw Elementary, Rick Prescott admitted surprise when he got word that East Liverpool authorities were looking for Roe to honor him. However, the fact that the boy had performed such a remarkable feat at his young age was not unexpected.

“Darnell is a model student and something we strive for at Wellsville. He is a very well rounded student athlete, and we are proud to say Darnell represents everything that we want a Wellsville Tiger to be.”

The principal continued, “Not many adults would have the capability to stay calm and demonstrate enough bravery to step in and help during a situation like this. At the same time, I am not surprised. Darnell is a leader and exhibits perseverance, kindness and concern for others on a daily basis.”

Osborn remembers how worried her son was about the girl. “I am particularly proud of him for going to tell an adult, as I would want someone to do the same with me if that was him (feeling suicidal).”

Police Chief John Lane was so impressed when hearing the story he believed they needed to do something special.

If anyone overlooks his age after hearing of his calm demeanor, that becomes crystal clear when Lane and patrol officers Rob Smith and Chris Green drove over to Roe’s East End home.

It was after receiving a $60 Game Stop card, he revealed he likes his Playstation, riding his bike, playing basketball with his friends.

Roe also said that he wants to be a NBA player when he grows up, and his favorite player is Damian Lillard with the Trailblazers.

Police Chief Lane believed the gesture was fitting. “We don’t normally get kids that age who stay on the line. He was calm and gave the right information,” leading to her life being saved.

Although mother and son haven’t seen the neighbor girl in the past week, they still worry about whether she is okay.

Osborn still extends the girl an open door offer if she thinks she needs to talk.

The East Liverpool dispatcher hopes to be able to meet Darnell Roe in person one day — especially since it is likely to be a call that she never forgets out of the thousands she has fielded.

“It is still is remarkable to me that he is only 11 years old,” Cornell said.