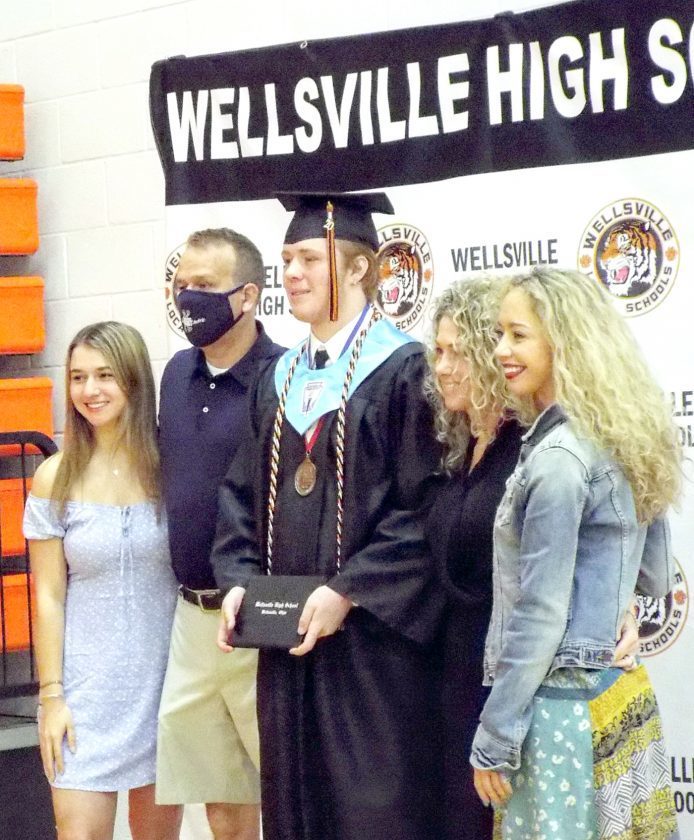 Tiger by the tail

WELLSVILLE — High school graduations are usually ones for the memory books; however in 2020, school administrators still found it to be the case but for a different reason.

When high school seniors were running into each other in physics class or baseball practice, this year’s students instead might encounter each other online. The coronavirus pandemic forced most to spend the remaining months of their senior year behind closed doors and learning their lessons behind a laptop in the privacy of their homes.

Proms, senior skip days, award banquets and sports tournaments were all canceled – all the activities that traditionally mark a high school student’s final year. However, administrators throughout the area were bound and determined that graduation would go on and be as special as possible.

Wellsville High School’s Class of 2020 graduated Sunday afternoon, after completing a journey much different than their predecessors.

In his first year at WHS, Principal Coy Sudvary was in for a monumental feat; however, when everything was said and done, he admits that he was pleased with the final product, considering the circumstances.

Although COVID-19 directives at the state level kept everyday interaction at a bare minimum, graduates clad in their caps and gowns showed up for preassigned appointments to have their moment with up to four friends or family members.

Superintendent Richard Bereschik and the school board were determined to make sure everyone was safe. Village police officers were stationed at the front door of the high school, greeting people with a digital thermometer and a stack of commemorative WHS Class of 2020 masks as a party favor of sorts.

After assuring everyone’s temperature was not elevated, participants were shuffled off in the groups of five to the high school gymnasium, when it was their turn to receive their diploma, any honors and be recognized.

This followed the trip to the school, which culminated many special surprises along the way: Congratulatory signs in the front yards of graduating seniors; a composite digital billboard of the class near the Calcutta exit; banners hanging on light poles, which were made possible thanks to the community, including the Nicholas J. DeSarro Foundation, the Amatos, Southfield Energy and the Chip Muse Wellsville Terminal; complimentary photographs from the day’s festivities that will be gifted to the graduates; commemorative travel mugs for each graduate from their principal; and a professional videographer, who shot the four hours of ceremonies for compilation into a much shorter version to not only be broadcast on WTOV-9 but the district’s YouTube channel and website.

The high school kitchen staff even gifted the graduates each with a box of cookies, he explained. “We wanted to make it special.”

Then the community concluded the event with a parade, after the ceremonies concluded around 5:30 p.m.

Sudvary acknowledges that it was a long day but worth it. “It was nice (considering the circumstances). Families were supportive, and I think they enjoyed the opportunity to give their kids their diplomas,” he continued, admitting that it created a lot of mixed emotions. Everything went well, and we appreciate the community support. There were a lot of positives.”

Hopefully next year, he hopes that Wellsville and other districts will have the luxury of going back to their much more traditional commencement ceremonies; however, Sudvary acknowledges there are a few aspects from the 2020 program that he wouldn’t mind hanging around.

“The bonding experience for the kids, which usually happens for this last few months, couldn’t happen like it does traditionally. That was the saddest part of this experience,” Sudvary concluded.