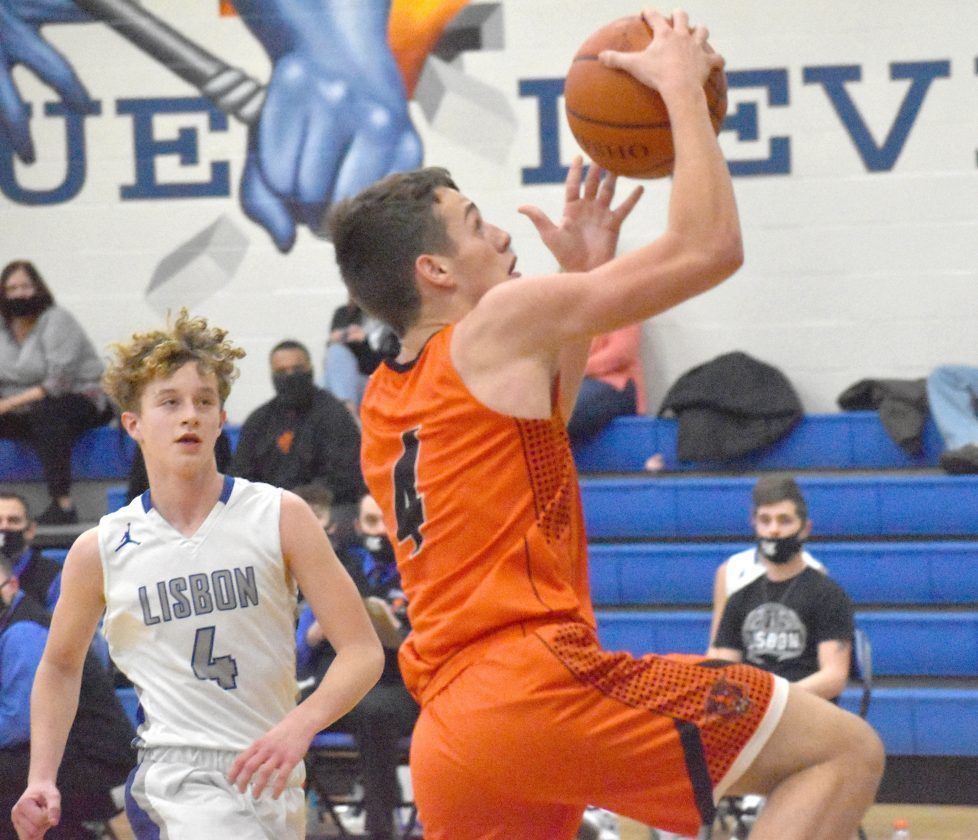 Tigers get back on track

However, for Wellsville on Tuesday, it was a fitting way to describe its game against Lisbon.

“Usually young guys struggle on the road but they looked good,” Wellsville coach David Thompson said. “I tried to tell them this is a must-win-game. I hardly ever say that but it was as far as the (Eastern Ohio Athletic Conference) is concerned.”

This was a back and forth game all night and in the end Wellsville was able to get a defensive stop with 27 seconds left as Jaxon Brewer got a block at the basket. Lisbon got one more chance to get the win after a missed Tigers free throw, but turned the ball over with 2.7 seconds left in the game.

“Just play straight up man to man,” Thompson said about their defensive strategy. “Get help on the backside whenever (Brownfield) posted and front the post. They did everything we told them to do. They played good man to man defense all night. We have probably only done that once the whole year.”

“Luke Green has been around few a years and he is a very good basketball player,” Lisbon coach Chris Huckshold said. “To be honest with you, when we put the scout together, their second best player is Jaxon Brewer. Kid works his butt off and we had no answer for him tonight. He is the reason why they won that game. He outworked every kid on the floor.”

Huckshold added “hands down he is the reason Wellsville won.”

“Keep the defensive tempo up and stay up on Ryan (McCullough) and (Blayne) Brownfield,” Green said about the Tigers defense late. “Make sure they get the least amount of shots possible. Faceguard them.”

“Brewer is stepping up his game big time,” Thompson said. “For a sophomore, he’s playing great.”

Wellsville recorded 15 offensive rebounds which was a key marker in this game.

Brownfield struggled with foul trouble in the game and Wellsville took advantage on the glass when he was out. Brownfield did go on a nine point straight run by himself in the fourth quarter to give Lisbon a late lead.

“Seniors should be able to put it behind them,” Huckshold said. “You can’t fix what is behind you. He came in and scored buckets and got into a routine.”

For Wellsville, the recipe for success is simple.

“Just keep moving the ball,” Green said. “We share the ball, we win.”

Wellsville is coming off a tough 61-55 loss to United on Saturday, but put that behind them to get a key victory on Tuesday.

“That’s how they are,” Thompson said about his team’s short memory. “They have been playing like that. Since school was out we haven’t been able to practice but they came out and bounced back.”

For Lisbon, it is about moving forward.

“You have to continue to work hard and get better,” Huckshold added. “Everything is still out there.”

Wellsville is at Valley Friday.

¯ In jayvee action, Wellsville won 47-31. For Lisbon, Austin Dailey had 12 points and for Wellsville, Dalton Heffner had 15 points.

¯ Southern has only played four league games, but for now, the league is just planning on playing the season out with no minimum league game requirement.

“Just play it out,” Thompson said. “At first, they said seven games and then they had a meeting the other day and said play it out.”

¯ Southern still has two games each left against Wellsville and Lisbon.